Some Things Remain the Same. published in the Long Island Quarterly in the early nineties

Some things remain the same
I am carried in a rickshaw
Only conscious for the epiphany from one tableau to the next, bundled like a cocoon,
strangers speaking in muted voices so as not to wake the sleeping child the patient the victim
The smells are different in each recollection
The wallpaper a cipher the clocks tick rocks bound
Each to its own rhythm a separate rendition,
This torturer in banana curls this one on a bicycle - these a pair under the bathroom window squealing and squirming in gleeful whispers trying to espy the child naked and unsuspecting.

Sometimes the language is not my own
The food smells overwhelmingly good
It makes me want to live again to inhale to taste
To be a member of this table or that one
To be a known member of this tribe
No secret customs or furtive glances no secret codes of conduct
out of my reach beyond my ken.

What remains the same is the need to stay
as still as death as silent
as twilight falling snow
til they have forgotten you are there and
you can join them with your shadow self
annihilating your own bulky needy presence
to become a member at this table
no terrifying unknowns no treacherous unraveling edges
no children unprotected no un tendered questions.

I awake in each new tableau as from
an interminable unconscious state.
I do not remember who I have been,
if I have made ketchup and eggs for my daughter this morning
or watched as they took my mothers furniture down the narrow staircase and loaded it onto a truck
destination undetermined.
Some things remain the same - there are the smells of the food cooking- there is the silent interrogation of a strangers eyes, the hollow reproach of ill spent youth
and always the accursed bounty of other peoples tables.
Posted by quiltcontemplation blogspot at 10:31 AM 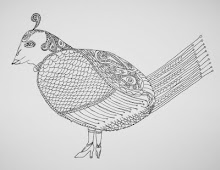 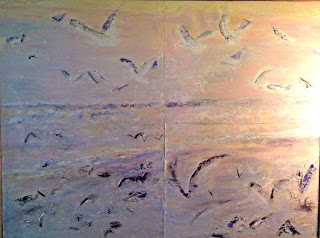